Explore the Secrets of Vienna

Every city has its own secrets and hidden gems it keeps hidden from outsiders, sometimes even some of the locals are unaware of these hidden secrets. While some of these hidden gems have some historical significance, some are less advertised spots that locals enjoy. Here is a list of some secret Vienna tours as well as private tours you can be a be a part of and learn the interesting history and stories of Vienna.

Schlumberger Cellar World is an impressive 300 year old vault that stores millions of bottles of sparkling wine or as they call it “liquid gold”. The magnificent vault was built by Carl Ritter von Ghega, is Austria’s oldest sparkling wine cellar.

Visitors at the Schlumberger Cellar World can enjoy the enchanting atmosphere of the vault and learn about the “méthode traditionelle” and sample the Schlumberger Sekt at the end of the tour or book a full tour for tasting of this exceptional drink. Wine cellars are so secret however, a secret vienna tour of this beautiful cellar should truly be on everyone’s bucket list. Find out more about this amazing wine cellar and details of the wine tours here.

Named after the statue of “Hermes as Guardian” that stands in the garden of villa, Hermes Villa was gifted to Empress Elisabeth by Emperor Francis Joseph hoping to persuade her to stay in
Vienna instead of being an avid traveller. The “Palace of Dreams”, built over a period of 5 years by famous architect Karl von Hasenauer, is now a museum with a remarkable exhibition of photographs, documents, plans as well as some of the original furnishings. The museum also includes displays personal items of the Emperor and the Empress as a display of their wealth. When in Vienna, a private tour of this beautiful villa is a must a part of the secret vienna tour.
Click here to learn more about one of vienna’s many hidden gems and book a tour of the museum.

The “Iron Soldier” or Wehrmann in Eisen is a World War I monument, which was set up with the purpose of collecting funds for war widows and orphans. Donors were given the right to nail the wooden soldier when they made a donation. Wehrmann in Eisen is a remarkable monument with a remarkable history. It is one of Vienna’s secrets as well as a hidden gem packed with interesting history and background.

The Esperanto Museum is truly a hidden gem of Austria as it is one of the world’s oldest language museums. The museum collects and presents a range of media and objects on the subject of Esperanto, a constructed language that was created to be used as a second language that would allow people who speak different languages to communicate with each other yet retain their own languages and cultural identities.

Visitors of this museum get the chance to view archive records of this rare yet alive language, major publications that use Esperanto, and interactive media that visitors to hear what the language sounds like. Truly a hidden gem and a secret of Vienna, tour of this one of a kind museum is an absolute must if you're someone who is interested in languages.

The Republic of Kugelmugel, which roughly means “spherical hill” was constructed in 1971 by artist Edwin Lipburger and his son Nikolaus Lipburger, in a small town called Katzelsdorf in the heart of Vienna. It was declared as its own “micronation” by Edwin after the authorities threatened to tear down the building as the government refused to issue the required building permit due to the “weird” nature of the structure.

Kugemugel is located in Vienna’s popular Prater Park and is mostly gallery space that is open to the public for exhibitions and performances several times a year. The Republic of Kugelmugel is definitely a perfect ending to the secret Vienna tour. Explore various areas around Vienna and end your journey at the Prater Park, an amusement park dating back all the way to 1766.

Vienna is full of secrets, some that’s shared with the world and some shared within itself. A trip to Vienna to visit these beautiful landmarks would be incomplete if you don’t get lost in another one of Vienna’s hidden gems, found in the compounds of House of Time. Explore the secrets of the magnificent suites have to offer. While booking a suite at House of Time, you also have the option to select private tours around Vienna on a helicopter or a limousine.

Find out more about House of Time

Check the availability of our suites for your stay. 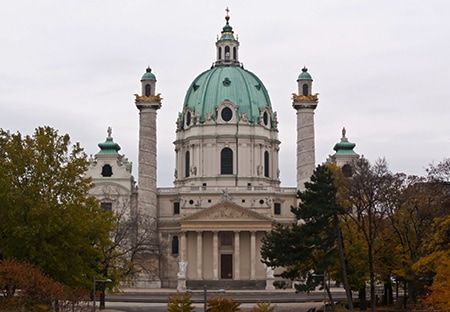